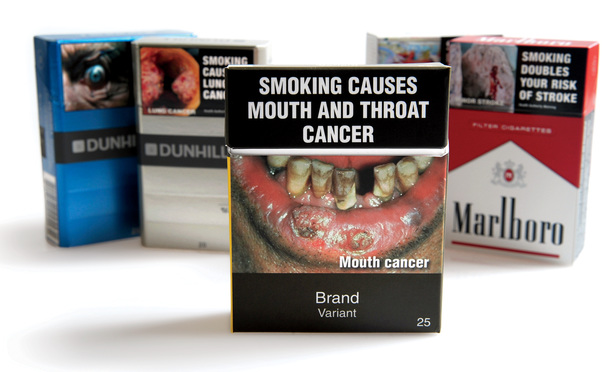 A new law passes as part of the Children and Families Act 2014 will make the UK the third country alongside Ireland and Australia to introduce plain packaging for tobacco products. Voted into law by a majority of 254 MPs, the rule will come into effect in May 2016, just over a year after similar legislation outlawed retailers displaying tobacco products for sale.

The specific design of the plain packaging has yet to be decided on but will be largely similar to the model already used in Australia. All tobacco products will need to be packaged in a uniform size, shape and design container, with a universal standardised font to identify the brand. The majority of the packaging will be covered in graphic health warning pictures with the rest an unappealing dark colour like the olive green used in Australia.

Attitudes towards the initiative have been mixed, with enthusiastic support from many MPs, health campaigners and members of the public, strong opposition from Tobacco companies and caution from many other sources. The two chief concerns that have been voiced are firstly the impact on the counterfeit tobacco trade plain packaging could have, and secondly the wider implications and precedent the decision creates for trademark and intellectual property law.

Counterfeit tobacco is already prolific in the UK, with customs officials estimating that one in every ten cigarettes in the UK is illicit. The money raised from counterfeit tobacco reduces tax revenue on tobacco and exclusively funds organised crime and even terrorist groups. It has been argued that uniform packaging with no brand imagery will make it easier for groups to expand the presence of counterfeit tobacco. Unfortunately, however, it has been impossible to collect any concrete data on what the exact impact may or may not be.

Secondly, the law does carry significant implications for trademark and intellectual property law by setting the precedent of government intervention on the ground of public health. The alcohol, gambling and fast food industries could all be subject to similar measures further down the line because of this decision.

The law will be sure to have a huge impact both inside and out of the tobacco industry when it comes into effect next year in May.